This month, we sat down to chat with Gerard, the team leader of Team Sweet Potato. Gerard has worked on various projects as a Vegan Hacktivist member, with the latest being Vegan Linguists, a content translation service that helps translate vegan-friendly content. Read further to learn more about the project and Gerard himself.

I like being able to build projects that we believe will help us get closer to a vegan world. Most of the code I’ve ever written has been for a product or feature that I had little interest in, and often with the end goal of making money for the company. It’s also nice to have ownership over something; I get to decide what gets built, as well as how. I have rarely had that luxury in my career.

Can you share some highlights of building Vegan Linguists?

With Vegan Linguists, we’ve figured out some better ways to build a project during the early stages. For example, something we did differently was getting user feedback early on in the project, which was extremely helpful. It’s still not perfect, but it’s a lot better than it would’ve been had we not asked for feedback. I’m excited to keep building projects that way in the future. As for the project itself, I got to implement things I’ve never really implemented before, such as a notification system with customizable settings for both email and on-site notifications. That’s a pretty common feature on a lot of websites, but it’s also something that’s typically already built when you start working for a company, so setting it up myself was very rewarding.

Now, the highlights are all about seeing the utility people get from it. We’ve had a lot of people telling us that they’re really excited about the project, and they’re already using it and are happy with it. That’s a really great feeling.

I suppose it depends on what you consider going vegan. In March 2017, I started following a plant-based diet with an exception made for an occasional food bar containing honey. My main motivation was environmental concerns. I had been a vegetarian for most of my life, but after learning about the environmental impact of the dairy and egg industries, I felt like a hypocrite. Sometime after that, I ditched honey and became more morally consistent in other parts of my life (e.g. not buying leather, animal-tested products, etc.). The reasoning for this was learning more about the ethical arguments for veganism, mostly through YouTube. 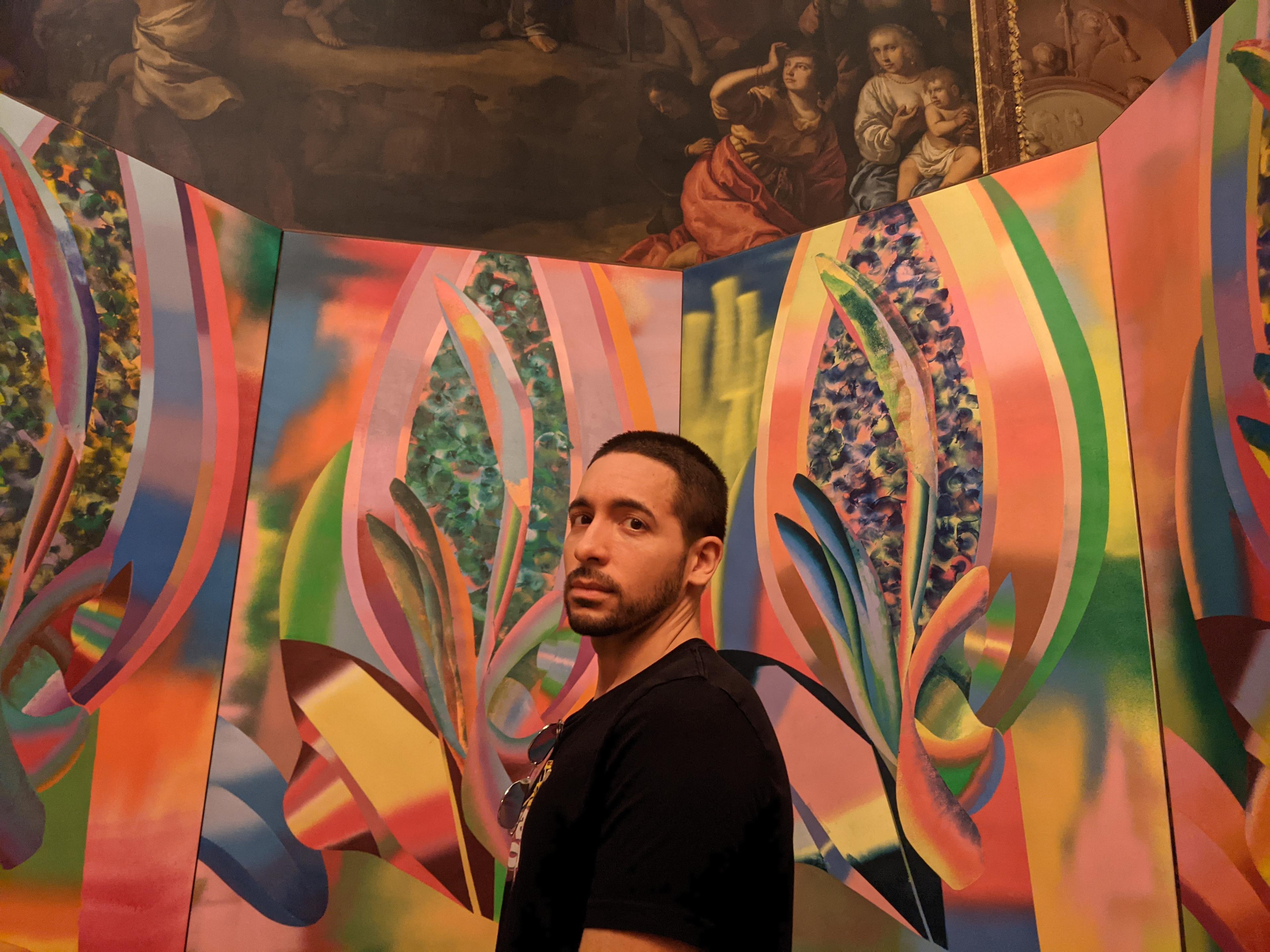 Gerard enjoying artwork at the Royal Palace of Amsterdam.

Given that you were a vegetarian for most of your life, what advice would you tell your earlier non-vegan self?

I’d just tell myself to go vegan, explain why, and assure myself that it’s not as hard as I thought it’d be. Since high school, I was convinced that it was healthier to be vegan than not, but I told myself that I didn’t consume enough dairy or eggs for the health benefits to be worth what I thought would be a huge strain on my life. Practicing veganism only keeps getting easier, and I have no doubts that I would’ve been perfectly fine taking that step to becoming vegan way sooner. I’d like to think that if I knew more about the atrocities committed by the animal agriculture industries, I would have gone vegan sooner.

If you could only code in one language for the rest of your life, what would it be?

I have two different answers for this question. With real-world constraints, I would say TypeScript, since it’s JavaScript, but better (in my opinion). It can be used in every environment I care about: web front-end, web back-end, mobile and desktop applications, games, etc. You can even use it for a lot of hardware hacking, if I wanted to branch out to that.

However, if we ignore that and think more theoretically, then I’d probably say PHP, as hard as that may be to believe. A lot of people claim not to like it, but in my experience, those programmers typically have no real experience with it. If you’ve worked with the language in a professional environment with skilled developers like I have (shout out to Etsy!), then you’ll learn that it’s a great language once you learn to ignore the haters.

As a seasoned developer, what is one project (whether for fun or work) that you've enjoyed working on?

Before moving to Amsterdam, I was working on a game in my spare time, which was really fun. I would like to get back into game development once I have more time. Game development is much more challenging for me, but extremely rewarding.

What are some interesting food experiments you’ve undertaken?

I’ve made so much stuff that most people don’t. I’m an expert at making soy milk, from which I’ve also made tofu, yogurt, and cream cheese. At one point, I assembled an incubator for making tempeh. I’ve also made a lot of seitan: to date, I’ve ordered 68 kilograms (150 pounds) of vital wheat gluten, which is the key ingredient for seitan.

I’m a big bread lover, so I’ve done a lot with whole wheat flour as well (normal loaves, pizza, bagels, etc.). At one point, I was coming up with weird ways to make bread. I was making bread by combining gluten with flours from non-wheat sources (oats, lentils, chickpeas, and corn), grinding my own flours where necessary. I wouldn’t really recommend any of them, but oat flour was probably the best of those. 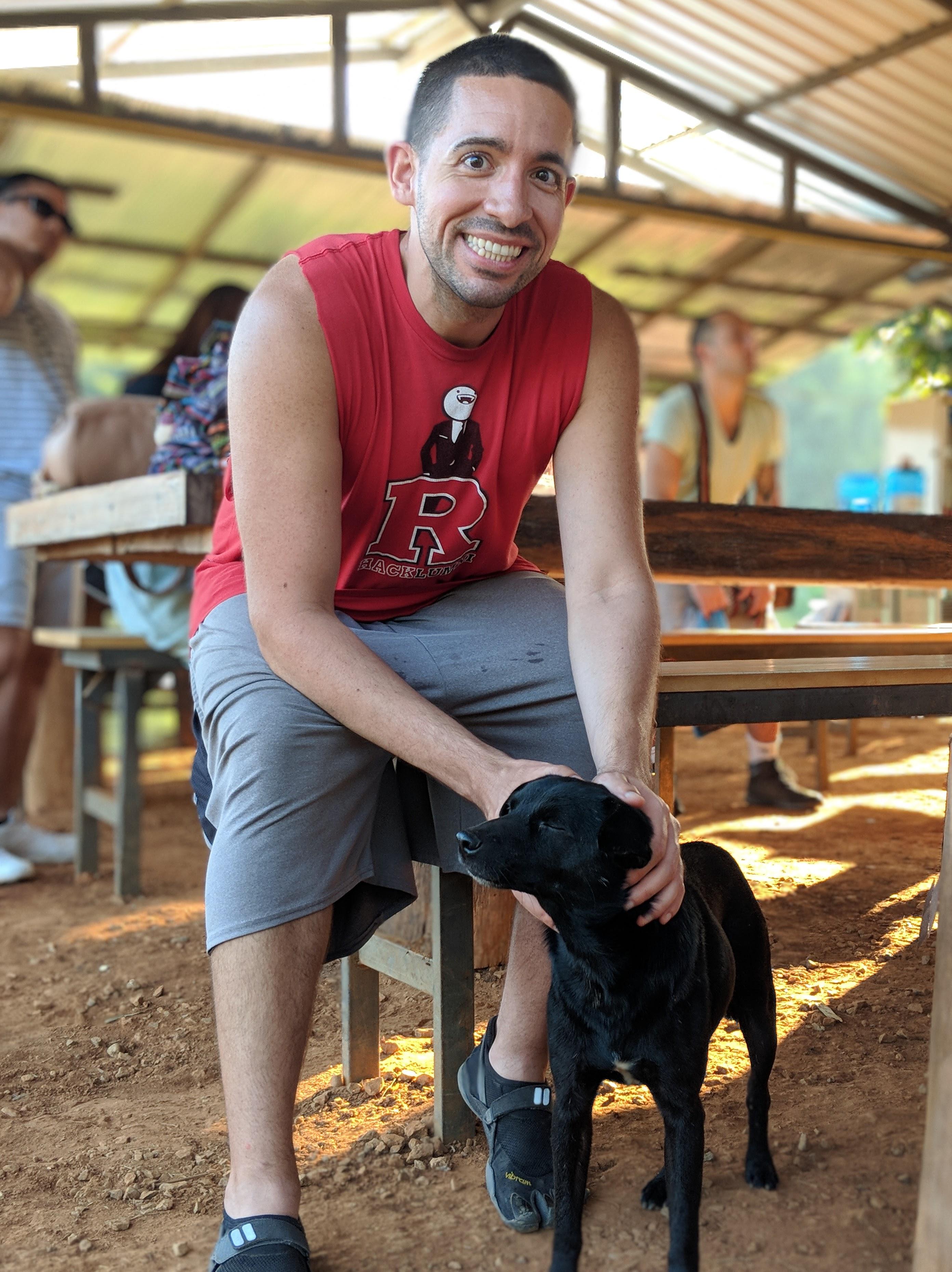 Gerard befriends a local dog at an elephant sanctuary in Thailand.

As someone interested in nutrition, who are your favorite plant-based nutritionists or doctors?

My absolute favorite plant-based doctor has to be John McDougall. He’s got a no-nonsense attitude and is great at explaining things in a way that’s easy to understand for the average person. He also has a long history of fighting to get the truth out there, including engaging in public debates with Dr. Atkins before the man was killed by his ridiculous diet. It’s unfortunate that McDougall doesn’t get enough credit or mindshare these days, in my opinion.

I also have a lot of respect for Neal Barnard. He does a lot of great work and is also really good at explaining nutrition. He’s a bit more approachable, which I think is good for a lot of people.

What is one anti-vegan argument you absolutely cannot stand (or perhaps, find amusing)?

Do I really have to choose one? Instead of choosing an argument, I’m just going to say the most ridiculous excuse I’ve heard was from a specific individual. Apparently, Usher (the singer) was following a vegan diet at one point, but stopped because he claimed it was too expensive. Usher. Eight-time Grammy Award-winning Usher. Usher, the fifth-most awarded artist at the Billboard Music Awards. Usher, who had four consecutive Billboard Hot 100 number-one singles, a diamond album, two multi-platinum albums, and two platinum albums. Usher, who has an estimated net worth of $180 million. Too expensive. Please.